Within the United States, November 11 is known as Veteran’s Day. For those of the Commonwealth, it is known as Remembrance Day. Each respective day of remembrance honors those who have died in the line of duty. In the world of Gardas and to all of its inhabitants, November 11 marks the day where honor is paid to the Fallen and Tuyir’s heroes. Though the day and ceremony is crafted as an honor to Tuyir, the god of war,  the honor is truly given to the Fallen, War’s heroes.

Like previous posts, this is a work of fiction and in no way is meant to make a mockery of observances recognized in the real world. I, Kelsey Jordan, honor all Veterans and all the ones who didn’t make it home. May they know how much they are missed.

Attendants dress in Tuyir’s colors (red and grey). Those who have seen war will wear a piece of their armor or a favored weapon. All others will wear an adornment from a Fallen who is of familial familiarity or the emblem of Tuyir. Hair should be worn as if prepared for battle. Any facial adornments should also be done as if preparing for battle.

The Saireceane–ritual leader–will step forward and lead everyone to prayer pose. He or she will then say the following words:

A time came where War beckoned.

and War’s heroes heeded the call to action.

They are our pride

–the Warriors and the Fallen.

On this day we Honor them

–give them our highest praise.

May we never forget the sacrifice they have made

They are owed our thanks and praise

for the freedom they have preserved,

the danger they kept at bay,

for their Courage in doing

what we have not done.

On this day we honor War’s Heroes,

Eternal peace to the Fallen and Honor to the Warriors who remain with us on this day.

Praise be to them,

for we are honored.

The prayer is said by all in attendance. This prayer is in remembrance of the Fallen, the ones who have Passed in battle or from injuries sustained in battle.

for they are blessed.

the blood they shed,

and the scars that shall never heal.

In life they were our shield—

the strength in the midst

They were our fearless soldiers.

Their sacrifice is unmatched,

They’ve succeeded where others have failed,

lived true to the Cannons and the Oaths:

To serve and protect; shield or to die.

Until the end of our days,

when the Histories are no more,

their legacy lives within us.

Never will they be forgotten.

In them we find our strength and Honor.

Blessed be the Fallen.

In remembrance of the Fallen, there is no feast. All adults must participate in a day long fast. Young ones are exempt from this practice until they are eligible to go to war in accordance with their cultural standards. The following prayer is said within the dining hall at each meal, with a slight change to denote the time of day.

The Fallen have given all they are for our [morning] nourishment

it is in their honor that on this holy day

For without their selfless sacrifice,

we would not know the freedom we enjoy

nor would we know the simple pleasure of a meal without conflict.

In this small gesture, we honor the Fallen.

For those in battle, nourishment is allowed, but food must be set aside for those who have Passed in battle and for any who were recognized during the presentation ceremony. Once the meal is completed the meals of the Fallen is placed in a fire. The following prayer is said to mark the sacrifice of food:

Though you are within Mother Death’s embrace,

May you find the offering worthy of your sacrifice.

In this small gesture, we honor the Fallen. 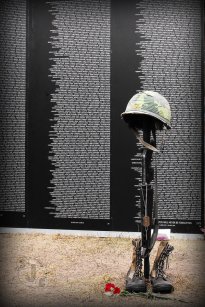