This is part of an ongoing writing challenge in which I base a short story or snippet off of a piece of art found somewhere on the web. Usually it kicks in my world building muse. None of the art belongs to me and I will do my best to provide artist credit when I can. For my fellow writers, if you’d like to join, feel free to post links to your own stories. If writing isn’t your thing, what do you think? 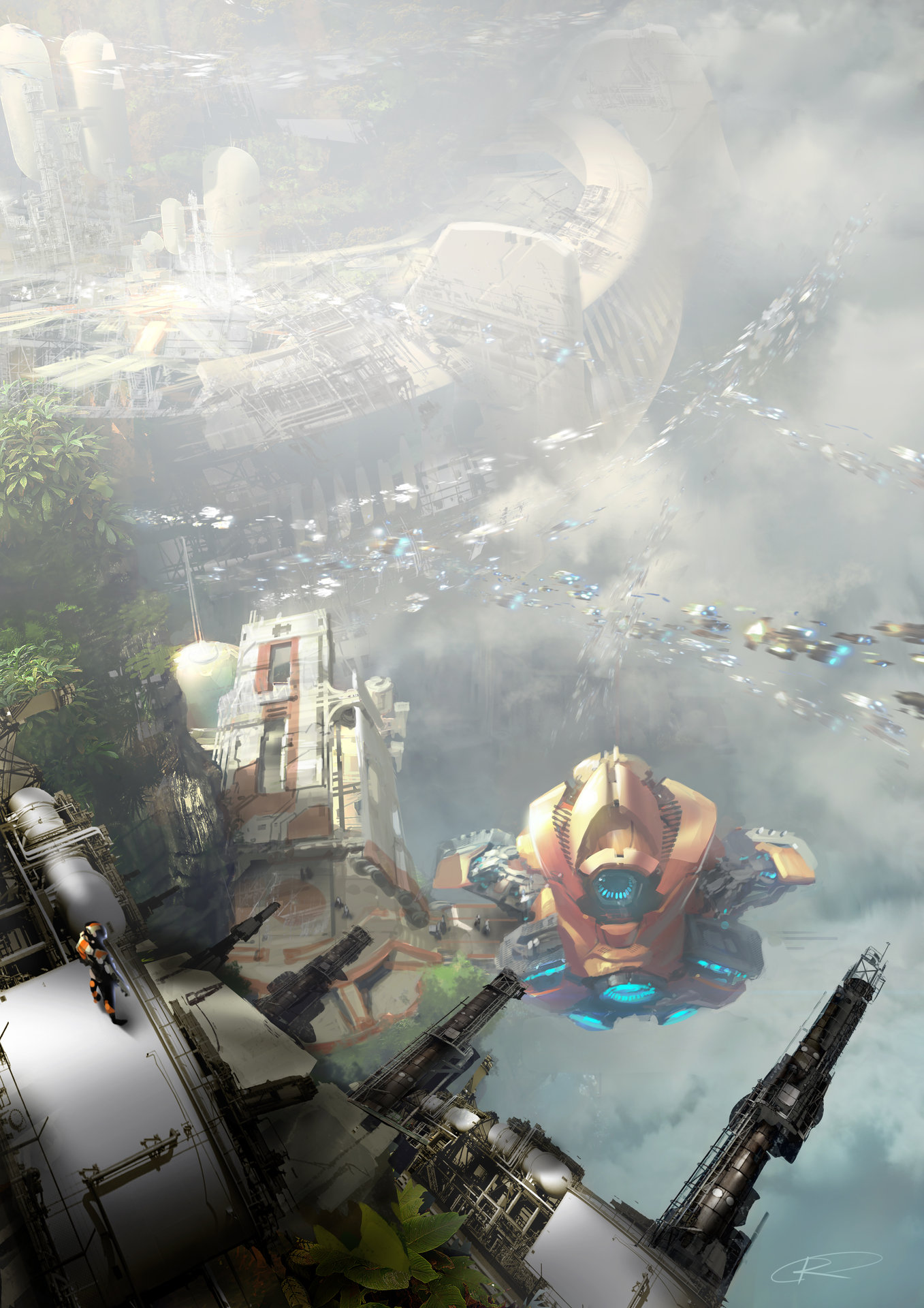 Jalor Stalsmein switched to autopilot  and turned in his chair to face his exhausted crew. He picked up the intercom microphone, motioning to his tired steward to remain in her seat.

“Thank you for selecting Galaxy AirBus for your intergalactic travels. As we prepare to dock and open the ports, be sure that you have your interplanetary passports ready for the agents. If you do not have yours available, you will not be able to continue on your journey to Naevi.

For those from Budrillia, please cover your heads in public arenas in adherence to cultural practices. Thanks you again and please fly Galaxy AirBus on your next expedition.”

He pressed the sequence to open the hatch upon docking before he headed to the cockpit’s hatch, where he stepped out and shut the door behind him.

The males of the Budrillia nation were wrapping their tattooed and ornately braided hair for modesty sakes as their female counterparts proudly displayed their savagely cut brows that marked their married status.

Once the port opened to the docking station, Jalor ushered the passengers from the craft, careful to avoid any physical contact with the females of the Budrillia and Lesko nations. One well-placed blade to his genitals when he was young made him wary of the prideful, yet lethal matriarchal species.

Jalor conducted the routine docking checks, starting with ensuring that all the seats were vacant and in good repair for the next set of passengers. He’d just made it to the back with an armload of discarded papers and wrappers when he met the wide-eyed red gaze of a Menera Harpy.

Jogging his memory, Jalor summoned a series of soft chatters that the Menara spoke in.

“I have no passport,” she chittered her reply.

He cursed in his own tongue before turning back to the golden feathered girl—a rare occurrence among her people.

Menera Harpies were an extremely territorial bunch and almost rabidly protective of their golden feathered people. The protection only lasted as long as the next sacrificial year when the golden Harpy was killed in the name of their barbarian god so that their favored fruit would grow on their prized trees. What made Jalor curious was how this particular child had managed to escape the clutches of her people, so he asked.

“They do not know I live. My parents hid my hatching egg from the Grand Mother.”

Jalor shook his head. The situation kept getting messier.

“What do you want me to do with you?”

Red eyes started to water, but she quickly dipped her head to hide her tears. “Do not return me. The sacrifice draws near.”

Of all the things she asked for, this was the most likely to get him killed. Not because the Menera Harpies would be after him, which they would if they knew he had her. No, it was because this child, with her golden feathers and bright red eyes would be worth a fortune to any who discovered her existence. Most nations–not to mention individuals–would happily turn her over to her Grand Mother for whatever gold and jewels her people offered, not that her people cared about such things.

Jalor was many things, independently wealthy being one of them. He also had his mother’s heart and couldn’t in good conscience turn a child over to be slaughtered. Still, how could he protect her when he knew his own crew would sell a bit of their soul to possess the vast riches they’d get for returning her to her people?

“Come with me. I cannot let you be seen.”

She nodded and followed silently behind him as he hurried her below to his private rooms. She’d be safe for the time being, but soon he’d have to find something else to do with her or risk his crew discovering her presence.

“Stay here for now. I will return when it is safe.”

The girl nodded and clicked a soft thanks.

Jalor simply nodded and returned to his task of readying his ship for flight. saving her could likely get him killed in the future, but something in her teary red eyes said she was worth the sacrifice.

Just a quick message regarding The Hunter’s Blade.It’s a bit behind, but I’m in the process of catching up now. I fell a bit behind due to my health (a reoccurring theme this year it seems), but I am almost caught up with typing my handwritten portions and should be ready to have the rest of the due chapters posted this weekend!

One thought on “Inspired Snippets: The Golden Girl”