I’m socially awkward, but I’m a writer so it’s okay. I live in my head so it’s almost guaranteed I’m barely mentally present for a conversation anyway. For me, the social awkward problem extends to social media. Again, I live in my head. I can’t help it. This creates a problem when it’s time for me to share something on Twitter, Facebook, [insert social media name here]. There are rules…oh so many rules about what you are should and shouldn’t do when promoting yourself and your work. Frankly it seems a little deceptive. In order for me, Kelsey Jordan, to live authentically, I have to talk about what matters to me and that means I have to go to where the stories come from… 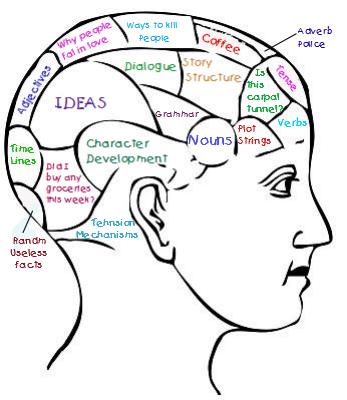 That brain is a relatively accurate representation of me. It’s missing a portion where I think about family, work, and school, but other than that yeah, it’s pretty spot on. I live in my head. I can’t help it. The oddest things spark inspiration and I can’t help but write, be it mentally or actually putting the words on the page.

And before you think I waste my time with mental writing, for me, I remember plot lines and character backstory better than I remember how long I’ve been married. Does that make me a terrible wife? lol Not in my marriage. I married an artist (painter), so he gets it. Still, for me my process works. I am heavily invested in all things writing. If I start a conversation, it is almost guaranteed that it will lead to my writing at some point. I am also more than likely thinking about writing as we are talking.

That’s not to say I don’t and can’t talk about other stuff. I play video games, I read, and sometimes I pay attention to the news long enough to get depressed, but most of that gets shoved aside when it comes to social media. Those interests are not really relevant to me when it comes to my “author persona”. No one cares what video game I just played or how many hours I seemed to uselessly waste playing them. I don’t always have nice things to say about the books I read, so I stay quiet out of general author courtesy. I think I learned that little rule somewhere. Trust me I hate it. I feel like a liar every time I don’t review a book because I have a negative opinion. I also have Fibromyalgia, but trust me when I say no one wants to hear me moan about the issues that keep me from writing days at a time. So where does that leave me?

Talking about writing, more specifically, my writing. I don’t like talking about the craft of writing. Authors with more credibility than me have already said the advice I can and would toss out. My tips aren’t guaranteed to work for the next person. Hell, sometimes they don’t work consistently for me.  So I talk about things like what’s going on in Gardas, what character is doing what, which character is being a little shit that day, or plot trouble I may be having. Those things interest me and are most likely at the forefront of my thoughts.

For instance, I might mention on [social media site] that I’ve mentally written the same book twice over the last two days. “Mental writing” is part of my creative process. I’ve put down the rough outline already, but the book itself has been mentally written twice so far. Today, I had an alternate twist come to light that remade the hero into someone even more vivid than I initially imagined him to be. I sat for 4+ hours having an emotional session with a character. I laughed, cried (real tears, the horrible, ugly kind) and came to an odd feeling of tranquility once my character reached his own sense of peace and resolution with his fate. This is how I spent my day before I could move on to working on my website. Notice I said before I could. I’m that invested in my process that I don’t feel in control of my mental faculties. My mind has been hijacked more than once.

Those are the things I talk about. That’s what’s important to me as an author to share. Not the food I ate, the nameless store I rarely shop at, but scenes from stories that randomly popped into my head or how a song inspires a character to wake up and tell me a tale. But according to certain rules I shouldn’t share this information too often. People want to know me. Well…that is me. I live in my head. My characters, my worlds and all that I create are an extension of me. I am talking about me, just indirectly.