For me, writing has always been my therapy. Thanks to my 8th grade English teacher, I was introduced to poetry. I immediately gravitated towards blank verse and for years wrote angsty (and sometimes insightful) pieces to deal with my frequent bouts of depression and suicidal thoughts. Poetry didn’t save me from attempting suicide more than once, but I won’t deny that my will to survive had dramatically improved.

I was teased for much of my life. If it had ended at the end of last bell, things would have been different, but the verbal bullying that bothered me the most came from someone who was supposed to love and protect me. It took me years to understand that my mother emotionally abused me, but as a kid all I wanted was for her to be happy with me—to be proud of me. Since she aimed so much negativity at me, but spared my siblings, I began to believe that her lack of happiness was directly tied to my continued existence.

The first attempt on my life came at the age of twelve. By sixteen, I’d graduated to tying a noose around my neck and building to courage to kick the rolling chest from beneath my feet.

The only thing that saved me was the knowledge that no one would know I died until it was time to wash the dishes. The sad reality that my only legacy in the world was the family dishwasher wasn’t good enough for me.

I cried my heart out, and hugged myself until I could work my fingers well enough to untie the noose and climb down. The entire time I was fighting for my right to exist, my mother—the one who made me feel I didn’t deserve my life—was stretched across her bed watching her recorded soaps, oblivious to my turmoil.

Things didn’t magically get better, but the mental scars I carry aren’t as crippling as they used to be. With age, insight, and persistence, I’ve come to better understand my worth and deny the ability for others to determine my value for me.

All of that is to say when I wrote The Lycan Hunter, I never saw my story in Alexis. Sure her parents are awful, but Alexis never thought to kill herself. Her parents were hateful people more concerned with the legacy they hoped to create than the children meant to create it. But Alexis is the fighter I never was.

It took a lot of editing of The Lycan Hunter and reflection, but I can now see that hint of myself on the page. She was the me I wish I had been—the version of myself I had to learn to become.

Maybe being like Alexis would have spared me some pain, but if not for the pain, what road would I have taken? Who would I have become?

I may never have the answers, but I know that while my life isn’t always sunshine and roses, it’s mine and the only one I get. I’m doing whatever I can to make it count.

If you or anyone you know are having thoughts of suicide, please reach out to the National Suicide Prevention Lifeline (click for website) or call: 1-800-273-TALK (8255). 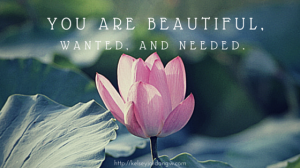